Whew... it's sure been a while since I posted a WGW huh? Well, this pregnant lady is gonna get back into the blogging routine for as long as I can before our little lovebug arrives! So this week's features are blogs that I've recently stumbled upon that really inspired me! They are beautifully written by such creative Mamas... I hope you'll be inspired too!

A gorgeous house, adorable kiddos, and all written beautifully... I could peruse this blog for hours!

Full of all things pretty & cheerful... this blog will certainly brighten your day!

Rebekah @ A Bit of Sunshine

This crafty Mama features adorable projects on Mondays & even sells some pretties in her shop @ Orange Poppy!

Danielle is such a sweet Christian Mama and her handmade goodies are for sale @ Sugar Money!

Talk about talented... the gorgeous tutorials and patterns of this Mama made her blog one of Babble's top 50 Craft Blogs!

First off, I want to say a great big THANK YOU for all the sweet comments and words of encouragement I got after my last post! Ya'll are soo sweet!

Sooo, after getting all that bedding knocked out... I'm onto my list of other little projects for Lovebug. I wanted to make some matching bibs & burpies that I've seen all over the blogosphere & Etsy, and after searching endlessly for the perfect bib pattern, I decided to do as the ladies at Prudent Baby suggested, and just trace my favorite bib. Guess what? It worked like a charm and I'm very pleased! Here's what you need... 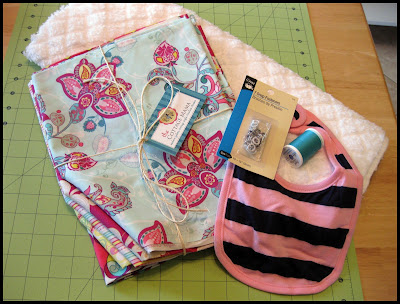 I won the fabric I used from the lovely Lindsay @ Cottage Mama a while back. She's super talented, and makes adorable baby clothes. Check her out!

Step 1: Trace the bib (folded in half) on a piece of paper to make your pattern
Step 2: Pin the pattern to both your fabric & minky (folded in half) and cut out both pieces of the bib.
Step 3: Pin your pieces right sides together and stitch, leaving a 1/4 in seam allowance... Don't forget to leave a 1 1/2 in opening at the bottom for turning out your bib!
Step 4: Turn your bib out (I used a chopstick to help me)
Step 5: Iron your bib nice and flat
Step 6: Top stitch around the edge ( I left a 1/8 in) and close the gap at the bottom as you go.
Step 7: Nail in those snaps (I had the hubby do that for me) 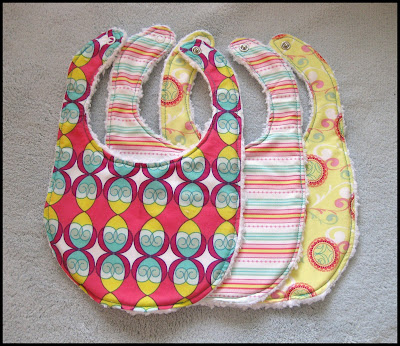 For the Burpies, I used THIS easy tutorial on Prudent Baby. It's basically the same process as the bibs, only easier... just using 18 1/2 by 8 1/2 rectangles of fabric! 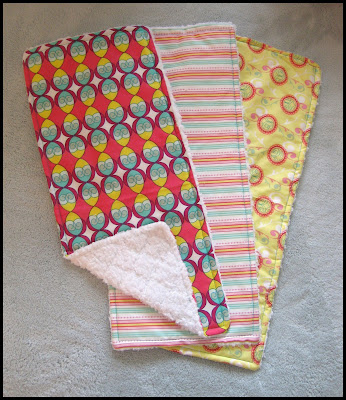 I think these would make adorable baby shower gifts! It's a quick and easy project, and it feels so good to make sweet little things for a baby you love! 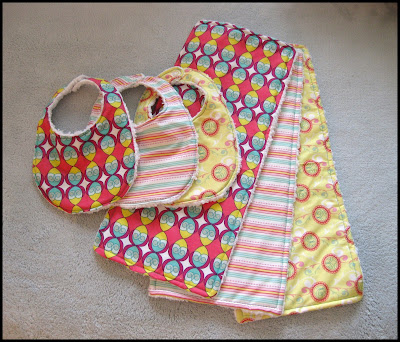 Have a great weekend!

I know the ol' blog has been lacking in posts... it seems like time is FLYING by and I can't believe that another week has come and gone. Lovebug's bedding is ALL DONE! It took a while to get those crib bumpers knocked out, but it feels SO good to have it all ready for her arrival. Now we just need the crib to put it all in... and maybe a few more things for the nursery too! 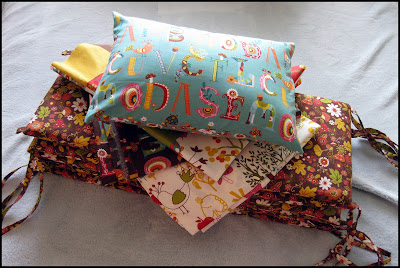 Here's the latest bump pics... as requested! I'm FINALLY wearing a pair of maternity jeans... after 25 weeks... I found a pair that fit like my old ones and are super comfy! God Bless the Gap... Skinny jeans in the size I was wearing before... YES please! 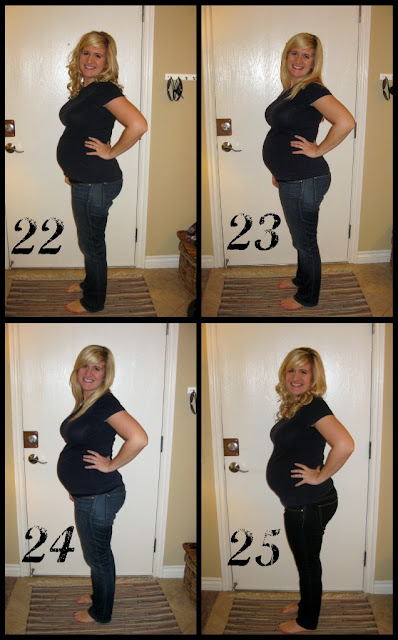 I'm getting a little nervous about how fast the time is flying by! I feel like I blink and another week is gone! I get caught between wanting her to be here tomorrow so I can see her pretty little face, and then being panicked that I only have 13 weeks left to prepare for her! Goodness.
I really want to be settled before she makes her big arrival... but there are some things that are up in the air about where we'll be in the future... causing this pregnant lady to be slightly stressed out... and when I say slightly, I mean MAJORLY. I've been dreaming of being a Mommy since as long as I can remember... and in those dreams I had my baby's nursery all filled with handmade things, painted, with pictures hung and diapers stocked... at this point it's killing me that her things are piled on the guest bed. ﻿So any prayers are much appreciated ya'll. Thank you!

So I know all the books say to limit my seafood intake... the whole too-much mercury thing... but I've been off Sushi for 5 months people, and I'm just dying for some seafood! So I whipped out an old recipe... one of the first ones I ever made Bri back when we were teenagers and dating and I wanted to impress him. It's my version of a recipe from a Thai food book I bought at B&N on a whim, and it is DELICIOUS! I never knew that curry could be so good! It may sound like a complicated dish, but no worries... you can do it! 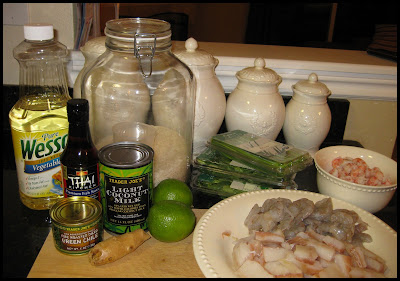 First, we'll make that curry! Grab your kitchen aid food processor or any other gadget that will pulverize herbs and get all the ingredients pulsing. When it's as fine of a paste as you can get it, set it aside.

Now you'll wanna grab your electric wok.... or if you aren't crazy like me and own every kitchen gadget possible... a large skillet will work just fine. Toss in your shrimp for just 3 minutes until they start to curl up and turn pink. Remove them and set aside.

Pour in the coconut milk and bring to a boil over medium heat. Keep stirring so it won't scortch! Add  2 heaping tbsp of the curry paste and the fish sauce. Turn the heat to low and let it simmer for about 10 minutes.

Add the Fish, shrimp, and lobster meat and cook for only 2 minutes! It doesn't take much and you don't want dry seafood! Then stir in the remaining chillies, a bunch of cilantro, and a big squeeze of lime juice.

Serve over a bed of delicious jasmine rice, with a slice of lime. Mmm... enjoy! 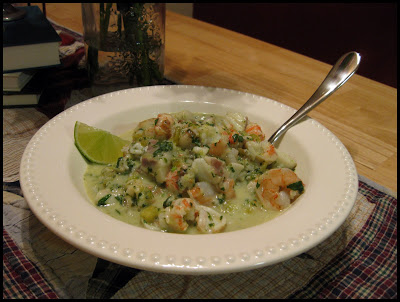 Labels: In the Kitchen

Well folks, the blog posts have been a little sparse these days, huh? I've been busy busy getting our sweet little Lovebug's bedding sewn and boy is that "nesting" stage in full swing! I want to clean, organize, and sew everything in sight! I've got the quilt top all done, and the fitted crib sheet sewn. I'm almost done with the crib skirt, but I'm a little nervous about starting those bumpers! 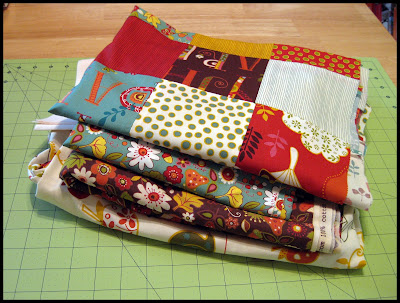 This past weekend we went up to Downtown Disney to see some dear friends, and it was a perfect day! Bri & I honeymooned at Walt Disney World, so all things Disney hold a special place in our hearts. We bought Lovebug her first little Minnie Mouse ears & her first Pooh! We also received a sweet package from Miss Raylene full of Royals & Mizzou onesies! And another package from her Aunt Nae & Grandma & Grandpa Gregg with her first Disney movie, Bambi, a blanket with her nickname, Lovebug, and some adorable clothes! Our guest room is filling up with tiny clothes & pink things and we're getting very excited to hold our little girl in our arms! 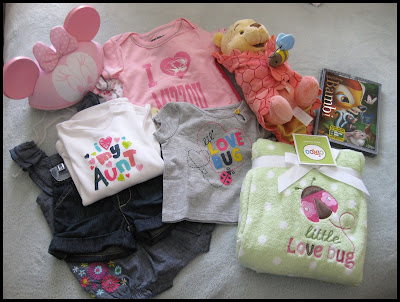