Well folks, there is certainly no dieting going on around here yet. In between cuddling my sweet Lovebug, cooking, cleaning and shopping for teeny tiny clothes, I've found time to keep the baked goodies coming out of the oven!

I don't know about y'all, but Pinterest is definitely where any freetime I find is spent, and if you aren't following me yet... there's a button on my sidebar. I have an entire board devoted to baked goodies... oh goodness is it causing trouble! I'd seen this little doosy floating around the web for a while and I finally decided to whip it up... dun dun duuuuhhh... 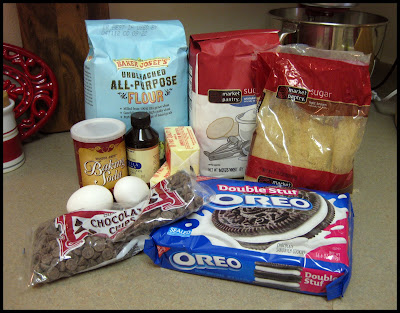 First you'll grab your mixer and cream the sugars and butter. Add the eggs one at a time and then mix in the vanilla.

Then grab a bowl and whisk together the flour, baking soda, and salt. Slowly add to the wet ingredients in your mixer. Add the bag of chocolate chips and give it a good stir. The dough will be nice and thick!

Now grab your cookie scooper (tiny ice cream scoop) and grab two balls of dough. Sandwich your oreo in between and then gently seal it up inside and give it a little roll... they will be the largest dough balls on a cookie sheet you've EVER seen. 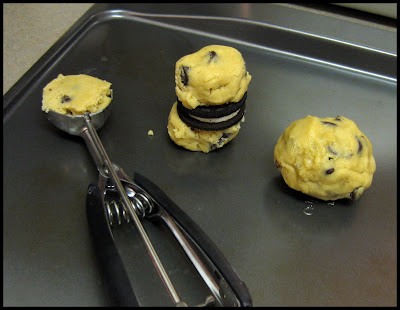 I like to use parchment paper on my cookie sheet... my cookies come out so much better that way! Bake them for about 9 minutes or so and then let them cool completely before diving into that deliciousness! 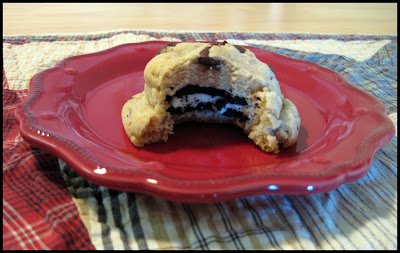 Grab a large glass of milk and a cookie and then die of happiness. Enjoy!

Labels: In the Kitchen

I'm sure many of ya'll have seen the amazing weekly picture project that Young House Love has done? Well if not, HERE ya go. There are a whole lot of copied versions all over the blogosphere, and weekly number stickers you can buy to stick on onesies too. I wanted ours to look a little different, and since I get to dress my little girl up (total dream come true!) I thought I'd put her in different outfits and use something handmade by Mommy. (Notice how I seem to speak in 3rd person lately? It's a lovely new habit) We've decided to take a picture of our sweet Lovebug on her quilt each Saturday, and then put the pictures all together in a beautiful coffee table book for us to treasure forever! 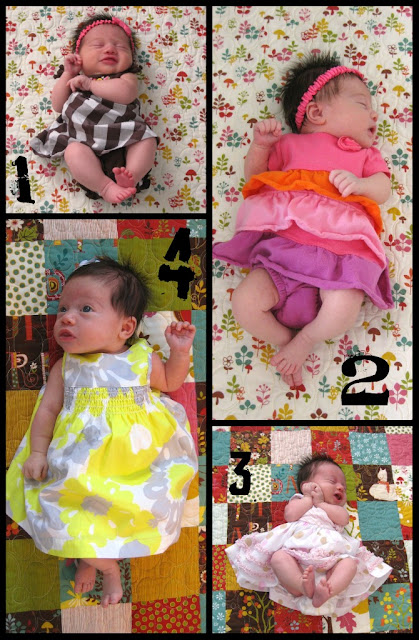 Back to the hospital... an emergency trip.

Sorry about the looong time between posts y'all... little Miss Lovebug is just too stinkin' cute to ignore while I blog. I'm sure once she gets on a more of a schedule we'll figure out some time for Mommy's morning coffee & blogging.  But for now... I'll be cuddling my baby and spending oodles of time adoring her.

So about that lovely little trip to Children's Mercy Hospital...

We had only been home for about a day and a half, and although our sweet girl had only been in our lives for four days, we just knew that something was wrong. She had been such a happy, chill baby... didn't even cry when she came out! We had to wake her to eat, and then she was content. But that night, after we'd fed, changed, rocked, rocked some more, paced the house, put her in the swing, and generally were exhausted, she was STILL upset. Bri finally went to kiss her little forehead and noticed that it seemed a little warm. We quickly grabbed the thermometer and found out that her temperature was 101. Thinking that we were just being paranoid parents, we called the pediatrician, who sent us to Children's Mercy at 6am. The whole way there, I kept thinking that she was fine... I just knew nothing could be wrong with my precious baby.

When we got there, however, things got a whole lot more serious and traumatic for Bri & I. They quickly told us that protocol for a newborn with a temp that high was to take blood, urine, and a SPINAL TAP. I immediately burst into tears. I was sleep deprived, still in pain from giving birth, and now being told that my sweet girl was going to be poked and prodded, and admitted for 48 hours to a hospital. NOT what I wanted to hear. Brian stayed with Lovebug while I stepped outside the room to try and regain some composure (I do NOT usually cry in public.) When they were done with the IV, blood and catheter, I stepped back in to kiss my baby and see the strong, rock of a man I married... which of course would give me peace and calm me down. WRONG. I walked in to see Brian not only crying (I've only seen that once), but tears were dripping onto my sweet baby as he held her. I totally lost it. We were TOLD to go get something to eat and leave our sweet girl while she was given the spinal tap. Hardest thing EVER to walk away from my baby. I think I asked the nurse twelve times if she'd hold her tiny hand while she got the spinal tap. Bri and I ate something at the cafeteria in silence, trying not to choke-up and hurried back up to Lovebug. 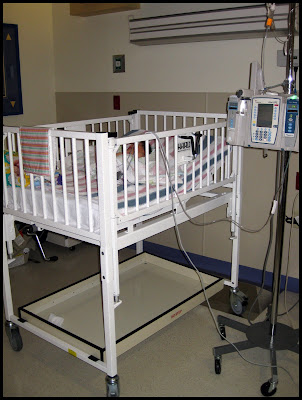 Her Crib at the Hospital
I was so happy to hold her, and yet so traumatized already. I tried to nurse her, and she wouldn't, and then we were being wisked away to be admitted and shown our room. It seemed like there were nurses EVERYWHERE all asking me questions and talking to me. I felt like a total zombie. I just held my baby, and pushed her IV cart wherever they told me to go. 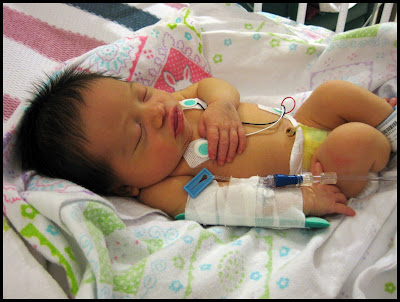 This picture breaks Mommy's heart.
Her 101 temp was back down to normal, and the doctor said that any virus was probably gone quickly, due in part to the colostrum that she was recieving from Mommy. We soon found out that Lovebug was pretty dehydrated, which caused a multitude of other symptoms. She had also dropped to far below her already small birth weight of 5lbs 15 oz to 5lb 5oz. The main issue became her eating... I REALLY didn't want to bottle feed, so we tried everything... even syringe feeding her pumped milk... nothing was working. I was forced to start pumping bottles so we could see exactly how many ounces she was getting and making sure that she received a certain amount. We were watched by a feeding specialist, lactation specialist, nurses and doctors, all who had their own opinions on what she was doing wrong, and why she wasn't eating correctly or enough... it was VERY overwhelming. We were told we had to stay another day to observe her eating, extending our stay to over three days.

Meanwhile, Bri and I were getting ZERO sleep, I was in a lot of pain, and my feet and legs swelled bigger than I've ever seen them. During all the drama, our family and friends were absolutely amazing. They came bringing clothes, food, snacks, magazines, and so much love and support. I'm not sure that we would have survived without their love and prayers.

Finally, after all the test results returned, and Lovebug had been pumped full of fluid by IV and forced to eat far too many ounces for her tiny tummy, we were allowed to go HOME! What sweet relief it was. I immediately felt so much more at peace... our little family started the recovery process all over again and began bonding and resting together.

Now we're home and Lovebug is healthy and happy... and we're loving every minute of it!