Where we're at and some Exciting News!

Poor little ol' blog has been so ignored recently... I know that it seems like such an excuse, but seriously y'all... Sleep deprivation is NO JOKE. Our precious girl has been re-doing her sleep schedule for 9 months and this Mama is TIRED. Ever since she started sleeping all night in her crib (around 7mo,) I put her down and then Bri and I try to have a little bit of time to ourselves, then I nurse her once more before I go to bed at about midnight. She WAS sleeping until 7ish... (For a few blessed weeks) Then the past month has been such a roller coaster. Sometimes it's 3:30, sometimes 5:30 and sometimes I get a whole 6hrs sleep before she's up again. She also fusses between each of the feedings. I know I'm not the only Mama struggling with this, but whew... I'm sure praying my next kiddo LOVES to sleep! Brian and I joke that since our toddler probably won't sleep... might as well have a newborn up as well!

I've taken her to the Dr twice in 2 weeks to make sure that she's okay (since she's been fussy and had congestion along with the sleeplessness.) She's aparently fine... and also NOT teething, since we've yet to see a tooth on our 9 1/2 mo baby girl. Unfourtunately the sleeplessness HAS taken a toll on Mama... I've got a virus that I can't seem to kick and the only thing the Dr told me to do was "Get a lot of rest".... I almost laughed in her face. 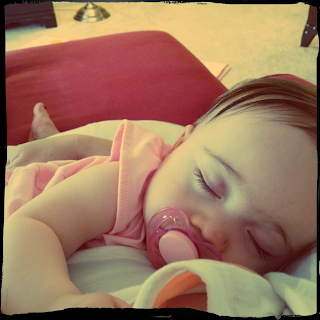 Sweet Baby would sleep all day if she was in Mama's arms.﻿

Other than trying to get better, I've been organizing, and getting stuff cleaned out of the apartment, because...

This little family of three is MOVING! In less than 3 years, we've moved from Missouri to an apartment in California, then to a new condo in California, then back home to an apartment in Missouri before Lovebug arrived and now... We're getting a HOUSE! A whole house, all ours to DIY our pretty little hearts out and do WHATEVER we want with it! I am seriously giddy over this... like jump up and down like a kid happy!

We've still got 4 weeks until we close, but we seem to be cruising though all the house-buying steps (loan docs are signed, inspection done, title co paid, etc) and I'm just falling in love with this sweet little home a bit more every day! Since I knew that this was a temporary apartment (definitely did not expect to still be here 9mo later) A lot of our stuff is still in plastic tubs or in storage at our parents' houses. I'll keep y'all updated with what's happening in the process, and I'll have a house tour once we close, but until then...


This sweet little house will soon be our Home!